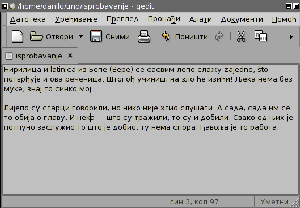 Here we go, preliminary results for GNOME Foundation Board of Directors are available.

I did my part voting this time (unlike with local elections :), and if results are not challenged, the board for the next year will be:

Along the same lines, here's the description on how I voted, and why I did it that way.

In order to select 11 out of 13 candidates, you had to drop two (or more). I thought I would vote for only five or six of them, but it turned out to be all 11. The ones I didn't vote for are Nat Friedman (too much talk about "Linux desktop", which I don't care about enough as much as I care about "Free Software desktop" and "Gnome desktop"; another, more important reason for me not voting for Nat is that I didn't see much of him in Gnome in the past 8 months that I'm involved) and Michael Meeks (I really liked his approach and attitude, for he seemed concrete and specific, but he's pushing for greater integration of OpenOffice.org in Gnome — as long as Gnumeric does the job for me, I don't care about that; if it were not for this hurdle, Michael would be atop my list).

I've voted for Jody Goldberg, because he's clear, motivated and does the right stuff (among others, keeps Gnumeric going :), and tells the right things. Owen Taylor got my vote for paying attention to bringing more developers in, and being involved in development of core Gnome technologies (Gtk+, Pango, ...). Dave Camp is a new member of the board, and that's exactly his advantage — refreshing and concise, just what is needed on the board, to write those minutes when nobody else wants to do it :-) Sri Ramkrishna and Jeff Waugh are fun and entertaining fellas, enthusiastic about Gnome, not directly involved in development (i.e. writing code) — just the thing a board needs, to provide some balance. Malcolm Tredinnick is a true hacker, aiming for other hackers, and helping everybody out by creating easier to use programs — he should be on the Board (btw, I'm surprised that he got into Board only barely — does anyone know something I don't, like does he scare kids at night? :-). Glynn Foster is moderate, with right measure almost everywhere, nice attitude, and a lot of energy. Jonathan Blandford, otherwise very active in Gnome development and promotion, is also ready to tackle finances — just the thing a Board needs ;-) Luis Villa did sound a bit confused in his candidacy letter, but since he seems to do the job better than he talks about it (he's current Board member, as far as I could tell :), I think he belongs on the board. While I found Leslie Proctor's explanations on why he is not more involved with Gnome a bit vague ("if I were on Board, I would know more about Gnome" — my impression is that it should be the other way around), I still think that a marketing specialist is a worthy member of the Board, so let's give him a chance ;-) Last, but in no way the least, Bill Haneman is accessibility specialist, and I hope that his insight will be valuable for Board to guide Foundation activities in a11y, as well to help promote Gnome a11y framework, which is probably unique in Free Software world.

So, now I have taken responsibility, and voted — with this list of candidates, you cannot go wrong, but it would still be interesting to see how the new board will cope with what waits ahead.

If anything goes wrong, be sure to remember — don't blame me! They did it all by themselves!